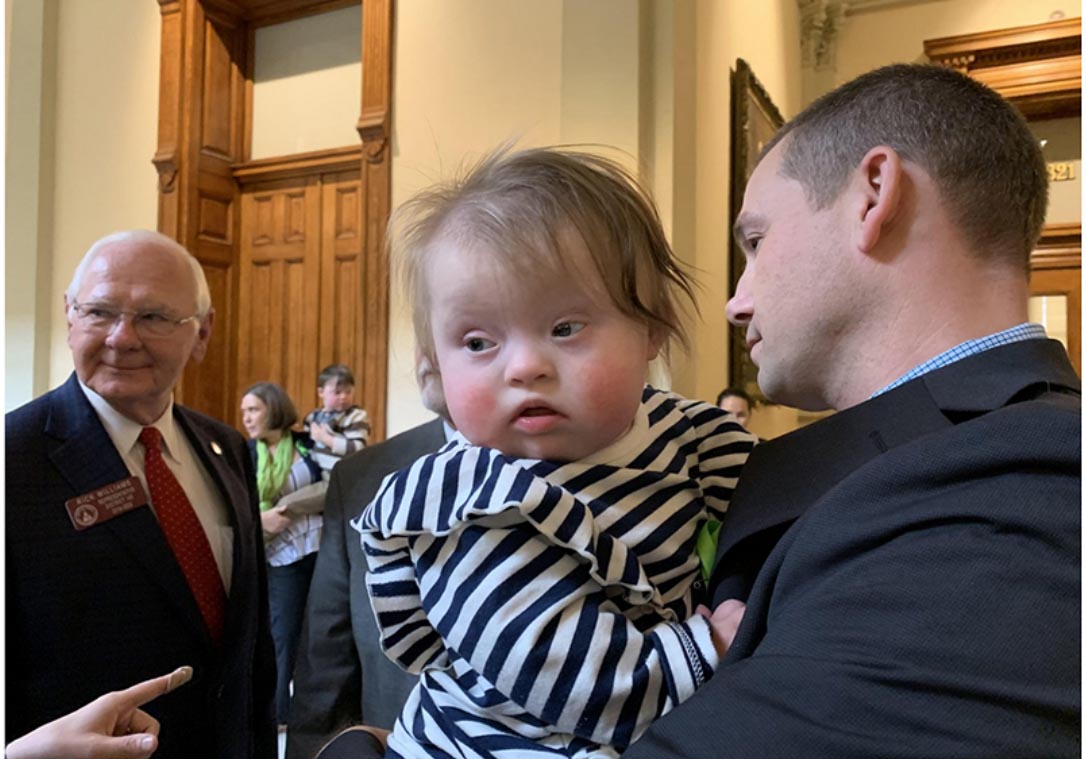 Gracie Nobles, who was born with Down Syndrome and a congenital heart defect, is the namesake of a bill that would ban organ discrimination based on a patient's disability. Rep. Rick Williams, the sponsor, is seen on the left. Jill Nolin/Georgia Recorderby Jill Nolin

Gracie Joy Nobles is a lively 11-month baby with Down syndrome whose ability to breeze past expectations is a constant source of amazement for her parents.

But when Gracie needed heart surgery seven months ago, parents Erin and David Nobles stumbled across a disturbing truth – that a stranger’s dim view of Gracie’s potential could limit her chances of receiving a life-saving organ transplant.

In Gracie’s case, the surgery to close the hole in her heart and repair a valve was a success and she did not need a heart transplant. But the new awareness of their daughter’s vulnerability motivated Erin and David Nobles to push for greater protections for people living with an intellectual or developmental disability.

“We’re not from political families. We don’t have any kind of pedigree. We don’t have families with connections,” Erin Nobles in an interview. “We were just a family that was caught up in a trauma that needed a solution.

“I remember feeling horrified at the thought that if our daughter did need something in the state of Georgia that we possibly could have had to move,” she said. “I think for most families, that would be a death sentence to their child, because most families cannot just pick up their whole life and move to another state with a critically ill child and wait on their heart transplant.”

Gracie, who lives in rural Washington County, is now the namesake of a House bill that would shield someone with a disability from being denied an organ transplant when they are otherwise an eligible recipient. Under the bill, insurers also could not deny coverage for an organ transplant because of a person’s disability.

Such protection is already packed into the federal Americans with Disabilities Act, allowing people to take complaints to federal court. A law in Georgia would open up state courts for those complaints, providing another avenue for those who believe they have been wrongly passed over for an organ transplant. These cases would be given priority status on the court calendar.

Already, a dozen other states have passed some version of this protection. Georgia’s proposal, which mimics Louisiana’s law that was put on the books last year, would apply to both children and adults.

“We believe it’s kind of a values-based conversation and that people don’t necessarily see the value of life in someone with a disability and so therefore there’s this, ‘Oh, you don’t need an organ because you really don’t have a good quality of life to begin with,’” said Eric Jacobson, executive director of the Georgia Council on Developmental Disabilities. “We think that’s wrong.”

The proposal doesn’t appear to have opposition, but all business in the House that it is unrelated to the budget has come to a grinding halt right now. Lawmakers in that chamber – where the bill sits in the House Insurance Committee – will begin to shift their attention back to non-budgetary proposals Tuesday.

“We just hope politics don’t get in the way,” said David Nobles, Gracie’s dad, who said he hopes lawmakers see it as a bipartisan measure. “This is not a political thing. It’s very much a human rights thing.”

Even though federal law already bars this form of discrimination, a 2019 report from the National Council on Disability found that people with intellectual and developmental disabilities still lack equal access to organ transplants.

Human organs are among the scarcest medical resources, with more than 113,000 people sitting on the national transplant waiting list when the report came out. More than 6,500 people died while waiting for an organ in 2017.

People with disabilities who need a transplant face additional challenges, including policies that exclude them as candidates or discrimination by physicians and centers that may brand them as a lower priority.

“It’s bringing light to the issue that people just didn’t know that this was happening,” said Stacey Ramirez, state director of the Arc of Georgia, which advocates for the rights of people with intellectual and developmental disabilities.

Ramirez and other proponents of Gracie’s Law say the measure would help give people with disabilities a fair shot at acquiring an organ that could save their life.

“If you have a child, a grandchild or a great grandchild, that is born with Down syndrome and needs an organ transplant, is your grandchild or your relative’s life any less important than anyone else,” said Rep. Rick Williams, a Milledgeville Republican who is the bill’s sponsor

The original article ran in the Georgia Recorder Online on 2/17/2020.