First class at Georgia Tech to graduate this spring 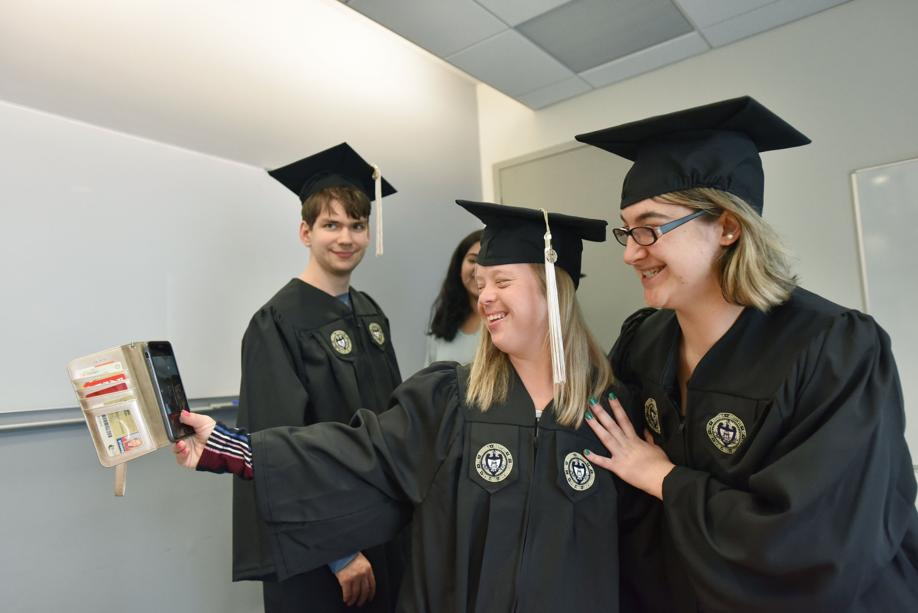 Alex Goodman and Faith Roman (right) pose for a selfie with Kurt Vogel in the background as they try on their caps and gowns ahead of their graduation from the EXCEL program for students with intellectual disabilities at Georgia Tech’s Scheller College of Business. Alexandria “Alex” Goodman takes a deep breath and pauses before trying on a billowy black graduation robe with a gold insignia.

Goodman’s face flushes pink. Her smile fades, and then returns as she places a cap with a gold tassel on top of her long, wavy blond hair, the weight of the moment sinking in.

“I’m excited and I am nervous,” said an emotional Goodman. “Is that OK?”

Goodman, who has Down syndrome, is on the cusp of a major milestone. The 25-year-old is one of seven seniors in the first graduating class later this month at Georgia Tech for students with intellectual disabilities.

It wasn’t long ago when high school was the end of the educational line for those with disabilities. Job prospects were bleak and many graduated to the couch. Most continued living at home as adults with a family member or in a supervised home.

There are growing efforts to change that. The Georgia Vocational Rehabilitation Agency is assisting nearly 8,000 people between the ages of 16 and 24 with intellectual disabilities, helping some obtain certifications for everything from nursing to robotics.

The program at Georgia Tech, one of the country’s elite universities, represents perhaps the most ambitious attempt yet to “mainstream” such young adults after a long history of segregating, isolating and giving up on them.

Goodman and her six fellow graduates, who have birth defects or traumatic brain injuries, won’t get a typical Georgia Tech degree. They will receive instead certificates of achievements in academics, social skills and career development. No small pieces of paper, they are designed to dramatically change the course of their lives.

For the last four years, they have experienced college campus life side-by-side with traditional students. They have cheered for the Yellow Jackets at football games, joined student clubs from astronomy to anime, and spent late nights studying at Starbucks.

The students audit regular Georgia Tech courses such as psychology, sociology and an introduction to business. They also take special classes like cooking, budgeting and conflict resolution to help them live independently.

But 75 percent who graduated from one of the Georgia campus programs - known as Inclusive Post-Secondary Education - in 2017 are employed and the others are continuing their education. Five of the Georgia Tech graduates-to-be already have jobs lined up; the other two are interviewing.

“I’m not sure of all of the answers, but this is one answer,” said Susanna Miller-Raines, statewide coordinator with the Georgia Inclusive Post-secondary Education Consortium, which provides research, funding and coordination for inclusive higher education programs.

Goodman was born with Down syndrome, a genetic disorder affecting one’s ability to think and learn.

The Fayetteville native loved going to school, especially her science classes and learning about plants and nutrition. She was on her high school swim team. Well liked by her peers, she was voted high school prom queen.

As the middle child, Goodman wanted to go college like her older sister and younger brother. Parents Paula, a stay at-at-home mom, and David, an orthopedic surgeon, wanted the same thing. The timing was just right. She applied and landed a spot in Georgia Tech’s new program EXCEL (Expanding Career, Education and Leadership Opportunities).

Four years ago, the parents helped her move into a high-rise apartment in midtown Atlanta. Pillows, butterflies and string lights adorn the room, decorated in bright pink, her favorite color. They hung a heart painting prominently in the living room that says, ‘Never forget you are loved.’

Paula worried Alex would get homesick or be scared on her own.

“After a couple weeks, she called and said she was too busy to get together,” said Paula with a smile, “and now she tells us when she can fit us in.”

Alex Goodman has remained busy, taking Zumba classes at the rec center and joining students at holiday parties in common spaces at her residence. She’s taken classes in art history, intro to film and the physics of weather as well classes for her certificate program: financial literacy, technology and career exploration. Once or twice a week she meets with a student “coach,” Charlotte Densmore, a junior public policy major.

Earlier this year, Densmore helped Goodman with budgeting and helped teach her the cost of everyday items. She presented a slideshow at a coffee shop, and at first Goodman was afraid to guess. She is a rule follower and hates to disappoint.

Densmore reassured her not to worry. Goodman guessed $75 for a package of toilet paper. They headed to a grocery store and scanned everything from shampoo and detergent to a bag of apples and toilet paper.

Over time, Densmore said the relationship has evolved into a friendship, and she adores Goodman, who is kind, hard working and full of enthusiasm. It’s also been a learning experience for Densmore.

“I think it makes [college] a more real experience,” Densmore said, “and not like we are in this bubble of students but with students who may have to work a little harder.”

From campus to Hotel Indigo

Every year, about 700 students graduate from special education programs at high schools across Georgia. The number of students enrolled in inclusive post-secondary programs is expected to rise to 250 students at 13 colleges within five years.

Since 2015, the Georgia Vocational Rehabilitation Agency has spent $2.6 million on inclusive college programs - a sliver of its annual vocational rehabilitation budget of more than $100 million for adults with intellectual and physical disabilities. About 70 percent of the state agency’s budget for rehabilitation is federally funded.

Annual tuition for Georgia Tech’s EXCEL program is $19,100 and 60 percent of the students receive full funding from the agency. Other programs smaller in scope are less expensive. The inclusive program at Albany Technical College is under $2,500 a year but currently only offers a one- or two-year certificate program for a business office assistant and no housing.

There are now 266 inclusive college programs across the country, according to Think College, a national organization dedicated to improving inclusive higher education options for people with intellectual disabilities.

Kennesaw State was the first university in Georgia to offer an inclusive education program, starting with three students in 2009.

During the first couple years at Kennesaw State, the program provided a college experience but that wasn’t enough for parents who wanted to see a more concrete return. The programs are now highly focused on career development. Academic advisors, career counselors and professors help students with everything from resume building to closely monitoring internships.

Four students in Georgia Tech’s program are interning at midtown’s Hotel Indigo. Drew Schulman, a junior, has a front-desk job waiting for him when he graduates. Gabriele Webster, the general manager, said Schulman has impressed her with his computer savvy and eagerness to help guests, with a natural ability to anticipate questions. When Webster went on a business trip, Schulman also took care of Indie, the hotel dog, keeping his bowl filled with water and ice chips, just the way Indie likes it, and texted his boss photos.

The internships don’t always go perfectly. When another Indigo intern came to work with his shirt untucked, a program advisor showed up every day for the next two weeks to make sure he was neat.

Getting attention of lawmakers

At first, Vogel, wasn’t entirely comfortable being part of a program exclusively for students with intellectual disabilities. Some of the students seemed too loud, and he distanced himself from other students.

Within a year, his perspective changed. He started making friends and advocating for people with disabilities. He lobbied and addressed state legislators to urge them to approve a state bill to eliminate the word “retarded” from Georgia laws. The word, he told lawmakers, “makes me feel that I am lesser of a person.” The bill passed in 2017.

Vogel has a birth defect caused by the abnormal migration of neurons in the developing brain.

“At first I wasn’t sure I fit in,” said Vogel about the program at Georgia Tech. “But I think a lot of people feel that, not sure if you fit in. I might be on the edge of the spectrum but that’s OK. We are each in a different place.”

During his final semester, Vogel interns three days in downtown Atlanta and takes classes in the legal aspects of business and in career development. On dry, sunny days, he takes a stroll around campus. At night, he enjoys reading articles on howstuffworks.com.

At least once a week, he spends time with his coach Daniel Lee, a senior business major at Georgia Tech. Lee is a huge Atlanta Hawks fan; Vogel is not interested in sports. Lee likes meeting friends at restaurants; Vogel prefers getting together in a quieter space on campus.

But Lee says they’ll be lifelong friends. Getting to know Vogel also has changed the way Lee views people with disabilities.

“I would try and coddle them, speak slower, like your usual stereotypical behaviors. Hanging out with Kurt made me realize how stupid I was,” said Lee. “The Kurt I got to know loves life. He is happy, cracks jokes and hanging out with him makes me happy. I see him figuring out so much in life.”

In addition to their April 27 ceremony, Goodman, Vogel and the five other seniors in Georgia Tech’s special program will be recognized at the May 4 commencement for all students. That follows an online petition by more than 8,000 students, graduates and parents of students to include them.

Then the seven students will tackle jobs and living on their own.

Frankie Sanders, a 22-year-old from Decatur, will work as a forklift operator at an Atlanta warehouse. Natalie Jackson, 23 and from Dacula, plans to work as a cashier or in customer service.

Goodman is wrapping up her internships at Rural Sourcing, an IT solutions company, and a Barnes & Noble book store. Reshma Patel, the store manager, said Goodman is punctual, hard working and getting faster at jobs like stocking shelves. At first, she lost track of time during her 10-minute breaks, so Patel gave Goodman a timer. It’s no longer an issue.

Goodman has accepted two part-time jobs, one at Georgia Tech’s campus recreation center, and another with food service at the university.

Vogel has a full-time job at the Center for the Leadership in Disability at Georgia State University. He will start in an administrative role, but is expected to also take on computer support and research project responsibilities.

“It’s relationships and interacting with people,” said Vogel of his time at Georgia Tech. “Ultimately, I think that’s what it means to be human.”

The original article ran in The Atlanta Journal-Constitution on April 12, 2019.