Deborah Hibben had a task at the start of every school year when her daughter Hannah was growing up. She had a conversation with teachers to share what Hannah, who is diagnosed with Down syndrome, responds to, as well as her personality and needs.

I would give teachers a one-page fact sheet on what Down syndrome is,” Deborah said. “I would tell them Deborah Hibben had a task at the start of every school year when her daughter Hannah was growing up. She had a conversation with teachers to share what Hannah, who is diagnosed with Down syndrome, responds to, as well as her personality and needs. ‘These are some of the things she likes,’ and try to get a [willingness] from everyone to be inclusive at the beginning of the year. Inclusion benefits all students.”

She also encouraged parents to call her if their child was uncomfortable or had a problem with Hannah.

Hannah, now 23, had many friends and activities growing up, and thrived as a result, her mother said. She went to roller skating birthday parties and even played football in the Faith, Hope and Love Flag Football league for children with disabilities.

“She started as a cheerleader and became a player and is credited with being the first female football player in that league in Henry County,” said Deborah, a McDonough resident.

Hannah became so close with two high school girlfriends in a church youth group that she decided to stay in high school until age 19 and graduate with them. This was despite having completed her academic requirements a year earlier. As a student with disabilities, Hannah could’ve stayed in school until age 22.

By the time of her graduation from Ola High School in 2015, Hannah also had a reunion with two friends who were classmates in elementary school that she had lost touch with when her family moved away.

“It was like they had never been apart,” her mother recalled.

Deborah and parents like her have said that it’s often when children with developmental disabilities are separated from typical classroom settings that incorrect assumptions are made about their abilities.

Aarti Sahgal, of Sandy Springs, found a variety of activities for her son Angad, 18, after transferring him to a private school for children with disabilities. “I had to work extra hard to make sure he could meet kids without disabilities,” Aarti said. 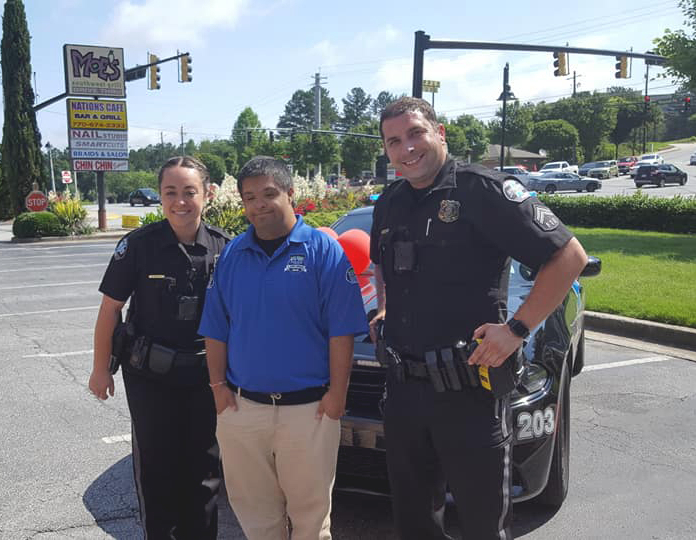 Angad Sahgal is proud to be a member of the Sandy Springs Police Explorers youth programAngad, who is diagnosed with Down syndrome, has a black belt in karate, plays soccer and takes weekly swimming lessons, as well as horseback riding lessons at Heaven’s Gate Therapeutic Riding.

“He attended regular soccer camp with kids without disabilities,” Aarti said. “He was the slowest [on the team], but that’s okay. Coaches, teachers and the other kids encouraged him.”

Through music therapy at the Georgia Center for Music, Angad has learned to coordinate his hands and legs while playing the drums, a favorite instrument of his.

“The music therapist has helped him to remember the words of songs,” Aarti said. “He is starting to believe that he is a singer.”

Angad has wanted to be a police officer since he was nine years old and recently joined the Sandy Springs Police Explorers youth program. In learning about local law enforcement, explorers from ages 14-21 develop skills in teamwork, interview witnesses and suspects, learn about officer safety and even Georgia criminal laws.

“They have been so welcoming,” Aarti said. “He does all of the activities.”

For the July Fourth holiday, Angad was scheduled to help officers direct traffic for the evening fireworks event.

Aarti enjoys that her son is like every other teenager. “He doesn’t want to be seen with me anymore,” she laughed. “He will walk in front of me or behind me. I know he is a typical teenager, but like any other parent, I can’t say that I have it all figured out.”

She has help. Aarti’s 24-year-old son lives in New York City, but his hometown friends have watched Angad grow up and treat him as their own little brother by taking him out to dinner, the movies and sporting events.

“They are a huge support for him,” Aarti said. “He loves talking. He is fond of people and animals. It all gives Angad so much confidence.” 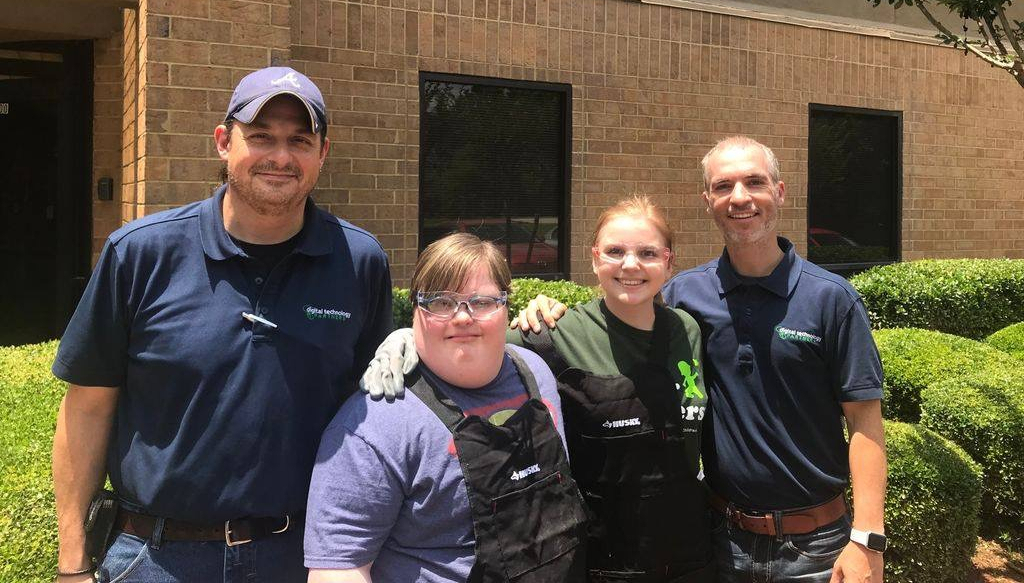 For Hannah, transitioning from high school to adulthood was a challenge, early on. A postsecondary academy was intended to teach her life skills. However, an administrator advised Deborah that Hannah was not employable.

The determined mother set out on her own to find employment for Hannah. A yogurt shop and Great American Cookie Co. hired Hannah immediately, and she recently started a new position with a computer recycling company.

“She loves seeing co-workers every day,” said Deborah. “Her employers are really great about social outings and include Hannah.”

Hannah’s camaraderie with co-workers is helping to improve her communication skills.

“Every positive experience she has improves it,” Hibben said. “From school to church and social activities to relationships at the workplace. One of the ways it shows itself is her behavior is more mature. Most of her co-workers are adults. I can see that she is grasping what it is to be an adult.”