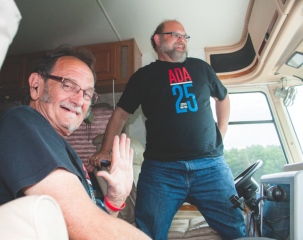 It began on May 11 with a double rainbow casting over the Tennessee mountains and ending with a triumphant return to Atlanta on a Friday afternoon, May 15th. Little did I know six months ago when Mark Johnson, the chair of The ADA Legacy Project, asked me if I would be interested in going on the ADA Legacy Tour Bus, that it would have such a profound impact on me. First, it’s important to clarify that this is not just a bus. It is a recreational vehicle (RV) that has made a journey quite like no other.

The RV is covered in photos taken by Tom Olin, photographer of the disability movement, storyteller, owner and driver of the RV. He was also my copilot for these five days, and it was just the two of us on an adventure to help tell the story of the Americans with Disabilities Act (ADA). Tom has been driving around the country with other copilots since July 2014 and has already visited 34 states. The Tour will complete its journey on July 26 in Washington, DC to celebrate the 25th anniversary of the passage of the law. Tom’s photographs will be displayed at the John F. Kennedy Center for the Performing Arts as part of the formal celebration.

Throughout this trip, I was reminded of the many people who came before us, laying the foundation for much of the struggle of which we are all a part.

Our first stop after leaving the National Center for Civil and Human Rights was the first exit off I-85 in South Carolina where Tom gave me my own set of keys and told me to drive the RV. I have never driven one before, let alone one on the curvy interstate headed toward the mountains. Tom promptly took a nap.

Our first real stop was Johnson City, TN, home of the northeast office of the disABILITY Resource Center. Director Tyler Venable arranged for a resource fair with the ADA bus as the main attraction. We set up banners with information about the ADA and of course, a display of Tom’s photos. Each photo includes a story and it was my privilege to hang around and listen to Tom relay each one. People arrived to see the bus, get information and tell their own stories. Some drove from nearby Virginia and others took day outings to see history on wheels.

We listened to stories about how the ADA had changed lives by allowing people who were once ignored to now live a meaningful life. We also heard how the expectations of the ADA may not have been met for all people because some still struggle to have a “real life.”

Not everything was as enlightening as those meaningful stories. In the middle of the day, Tom went to get in the RV only to discover we were completely locked out – the keys were not working. For two hours we banged, pushed, pulled and struggled to open a door.

Finally, a latch was jimmied and we were able to get in, but the lock needed to be replaced. After a detour to Elizabethton and a short drive, we found ourselves at an RV park halfway between Johnson City and Knoxville – our day three stop.

We would spend two full days in Knoxville. The staff and board members from the disABILITY Resource Center, Katherine Moore, Basil Farris, Nicole Craig and Dennis Clark did a great job creating two events. The first one took place at the Turkey Creek Regal Pinnacle movie theaters where we displayed over 30 of Tom’s photos.

People on their way into and out of a movie took the time to pause to see the photos of young and old, some of whom had been handcuffed by the police utilizing the ideas of Mahatma Ghandi and Dr. Martin Luther King, Jr. demanding justice and equal access. Not many asked questions, but I had to wonder about their impressions and thoughts as they walked away.

Were individuals aware of the struggles or was the segregation of people with disabilities new to them?

The next day was a celebration in Downtown Market Square where hundreds of people wandered throughout the day. Mayor Madeline Rogero, State Senator Becky Duncan Massey and City ADA Coordinator Stephanie Brewer Cook helped the Center celebrate the 25th anniversary and the arrival of the ADA Legacy Tour Bus.

People who had attended the signing of the ADA came by to see the bus and reminisce about being there and what has happened in the 25 years since. One guy who writes a blog about disability and the media thought progress had been made as more people with disabilities were being featured on television and in advertisements. At the very least, this shows that society has recognized people with disabilities’ economic potential.

Our final day began with a trip to the Highlander Research and Education Center, the place where Civil Rights activist Rosa Parks came before her historic decision to remain in her seat on a Montgomery City bus. It is where men like US Congressman John Lewis came to organize the Student Nonviolent Coordinating Council. It is where a group of people, including Tom Olin, came 25 years ago to discuss equal rights for people with disabilities.

I could feel the spirits of those who came before us and have let us ride on their shoulders in that room. The next stop on our Road to Freedom journey would take us full circle, back to the Center for Civil and Human Rights in Atlanta.

We arrived back in Atlanta to much excitement. GCDD Council members and advocates wanted to know how the trip went and I detailed as much as I could muster before exhaustion began to set in. Tom needed to prepare for the next leg of his journey. Throughout the trip, I wished that we had someone who was documenting these stories both in words and through pictures as the experience could reach so many more people that way. While I had no idea what to expect, the trip turned out to be one of the most enjoyable and worthwhile times I have ever had.