Good morning from Detroit! I have spent this week on a learning journey with members of our Real Communities projects in Savannah and Clarkston. Both groups are using food as their starting point for community building. We picked Detroit because some of the most innovative food justice and community building work in the United States is happening here.

I was caught off-guard by the intense reactions I got when I told people I was going to spend the week in Detroit. So many of them asked me why on earth I would come on a learning journey here or expressed their sympathies that I “had” to come here for work. Detroit has certainly been through the ringer - the economic crash happened here long before it hit the rest of the country and 1/3 of the land in the city now lays vacant. Even if you tried, you can’t miss the violent impact of globalization and the crash of industry on this city and the people who live here. However, what initially attracted us to Detroit (and what has been reinforced over and over as we have met with folks involved in community building work here) are the incredible opportunities that lie just below the surface. People in Detroit have been forced to try new and innovative approaches. They learned that relying solely upon government, industry, and programs was neither sustainable nor realistic. Instead, they have looked at what they already have in order to meet their own basic needs and figure out new ways of building communities.

One of our many generous hosts in Detroit has been Rich Feldman of the Boggs Center. When I first began reaching out to folks in Detroit to plan this learning journey, I contacted the Boggs Center and almost immediately received a response from Rich. He and his wife, Janice Fialka Feldman, have long been involved in community building work in Detroit. They also happen to have a son, Micah, who has developmental disabilities, so they were particularly interested in the work we are doing in Georgia.

When we arrived on Monday, Rich took us on a tour of Detroit to orient us to the rise, fall, and re-birth of the city. He told us that there are two ways to view Detroit – only with our eyes, which would elicit the types of responses I got from many people when I shared my plans to travel here, or, with our eyes and our hearts, which is the lens through which we have intentionally used to view our time here.

We have been inspired and recharged by our time in Detroit. We have made many new connections and have learned that we are part of a larger community of folks who are working on the local level to transform their communities and neighborhoods. The people we have met, like Real Communities folks in Georgia, are using community gardening and urban agriculture not just as a way to give folks access to fresh, healthy, local foods, and create economic opportunities but as a starting place for community building and for engaging folks who have traditionally been dismissed, written-off, and marginalized. This trip is just the beginning of what I hope will be a long relationship of mutual learning with folks in Detroit.

More to come upon our return! Right now, I am off for another day of learning in Detroit!

Detroit Chinatown Mural below - More information about the meaning of the mural available at http://www.kuidaosumi.com/murals/mural-chinatown.html 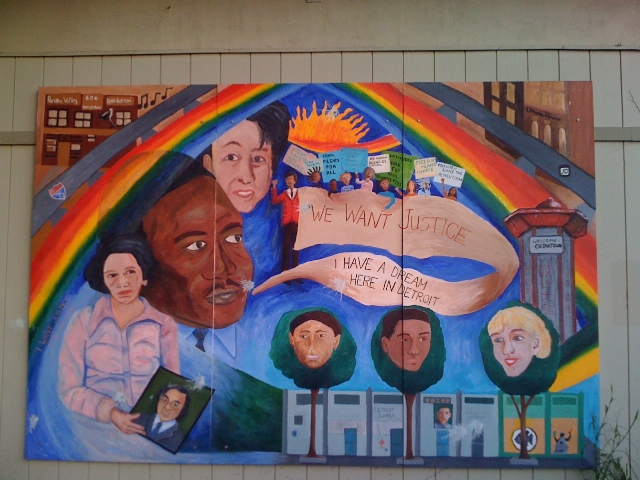