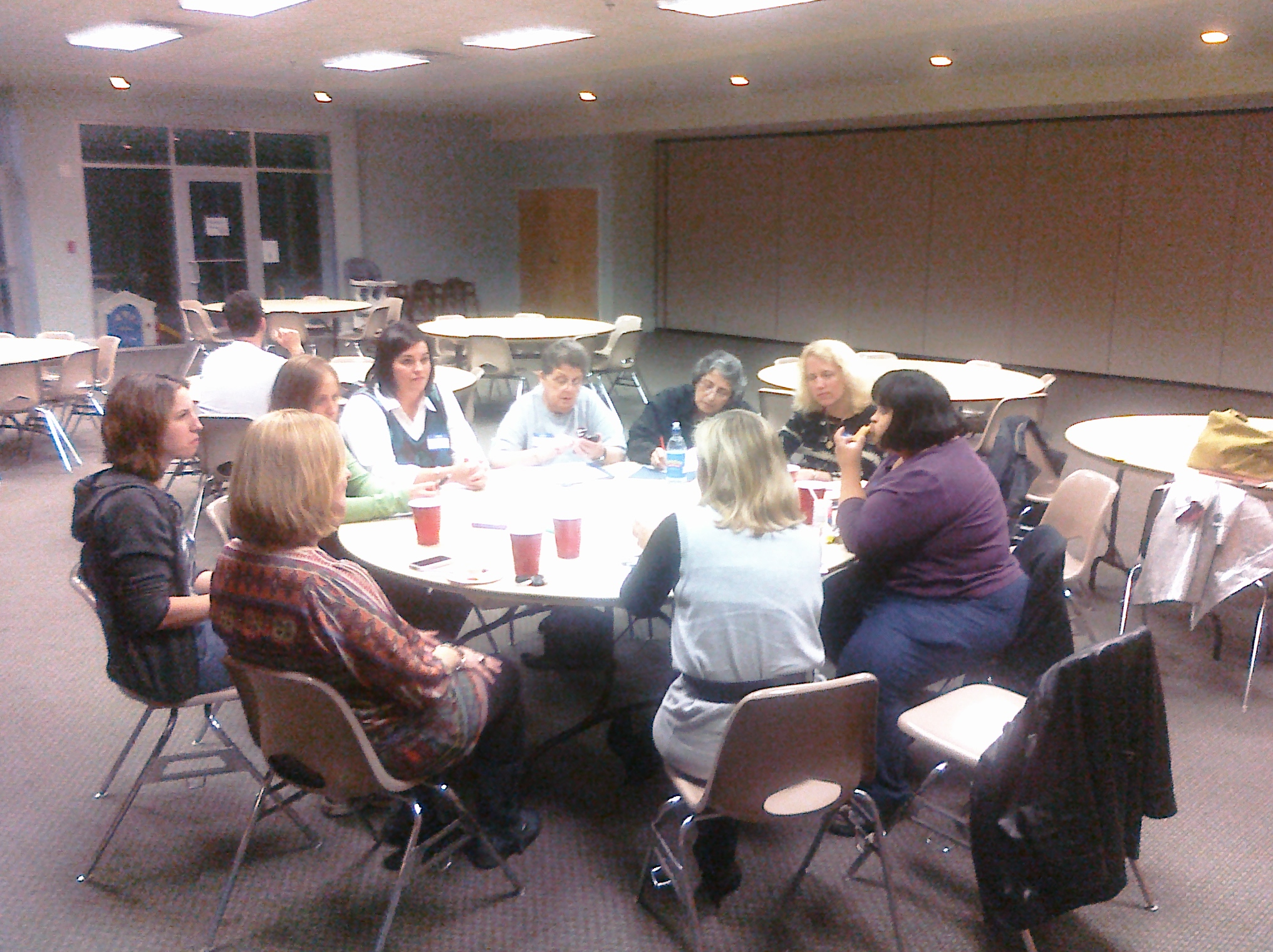 Sounds like the title of a novel.  It's just the title of this blog, the last (for now) listening tour for the Unlock Campaign for the Fall of 2011.  We had a slim turnout.  Anyone who follows college football knows that this was the eve of the Georgia vs Florida game, so Athens was like a ghost town.  Regardless, for all the tours, we could never predict how many people would show up and no matter how many did, we delivered the same information and offered the same opportunity to share.

This group was all Moms (and Dave Z, but he came with me).  All have children or young adults with developmental disabilities of varying types and degrees.  And yet every single child had a different array of support from a different agency or type of Medicaid.  This didn't strike me until later, remembering the conversation that none of the kids had access to support from the same source.  On the one hand, one could argue that this was how it was "supposed to be." After all, the kids were all individuals.  On the other hand, only one of the five families was getting everything they needed.  One Mom of a 12-year-old with significant developmental disabilities was only getting family support.  This provided her with some support for her son so she could stay in class in vet school, but he also needed adult diapers, and the funds didn't cover all of that expense.  She also wondered if she would be able to get more support once she began clinical rounds, which would mean more time away from home.

Mom two has a son with significant developmental disabilities about to enter high school, who uses a chair, and she has CCSP which provides her son with a few hours of support in the afternoon and every other Saturday.  But when he gets ready to graduate, this will not be enough.  She'll need more support at home for him, otherwise she and her husband both cannot work.  And he could work, so he would need supported employment also.  CCSP is delivered through the Division of Aging, and is intended to support aging folks to stay in their home as long as possible.  This was a stop-gap because of the waiting list for the NOW / COMP waivers and will not meet his needs after high school.

Another Mom had Medicaid through Katie Beckett.  And she was told Medicaid wouldn't pay for glasses for her daughter because her primary insurance didn't cover vision care. Wait, isn't Medicaid the payer of last resort?  And isn't any child on Medicaid entitled to the coverage of the federal EPSDT mandate?  And isn't vision care a service on that list of services covered under EPSDT. Yes.  So what's that about?

Mom four is an older Mom with a son in his thirties with autism, and she can't imagine having a break.  She's never had one.  She has no services.

Mom five miraculously and happily is getting what she needs for her child with rather significant needs.  So both she and her husband can work, and he is doing well despite some complex medical issues.

The point is, all these kids had developmental disabilities, and there was no coherence to the supports that they had.  They got what they did because the system directed them to something that was available.  It wasn't necessarily constructed to meet their particular needs. We do a lot of this.  Professionals buy into it as well. Instead of writing orders, say for glasses that are COVERED under the law, they call, get a wrong answer, tell the Mom Medicaid won't pay, and that's that. Amazingly, even the parents with just a little support felt guilty for it and didn't want to ask for more even though they needed it.  That a parent of a child with significant challenges feels guilty for accepting a little help and is reluctant to ask for more is about as telling a statement as what was shared by the older parents in Cochrane who were tired of "begging" for help for their loved ones.  We have created, through policy and funding decisions, an "other" population that somehow always needs special consideration to get what the rest of us can get on our own and expect--at least we have the expectation of opportunity.  We are wrestling now with trying to change the perception of treating people with disabilities from a caretaking and helplessness manner to supporting their desires for own home, employment, productive day, membership, participation and contribution. It's a HARD conversation.  Even some parents and family members don't believe it.  And if they do, if they have even a little gleam in their eye of something better for their family member, we tell them they must go on a list to wait, for no one really knows how long for a little support to see that gleam become a better life.  It doesn't take long to extinguish that gleam.

I'm tired of the waiting list.  Even after I described to this small group the budget package Unlock would be working on in addition to the money we know the Commissioner asked for and against the 2% cut the Governor required, someone said, "That's just a drop in the bucket." A drop in the bucket.  That phrase stayed with me all night.  It is.  Even if we get another 1000 services, get some kids day supports and employment, get some older folks some respite, get the DFCS kids into permanent homes, there's still a wave of need. It feels too big to stand in front of......and we've been campaigning for YEARS. What is it going to take to shake it loose?

It's going to take thousands of relentless voices.

October 28th, 2011: Athens area from 6-8 pm.
More details and location to be determined!  Please check back for more information.

Please view the above pdf flyers for more details.  You may also visit the Unlock the Waiting Lists website
for more info.To rsvp, please call 404-657-2126 or  email .