"Today, more than two decades after the ADA was passed, 47% of working age Americans with disabilities are outside of the workplace compared to 28% of those without disabilities," Mizrahi said. "But we are not statistics, we are human beings with power, with education, and with value. And we know that together we can make changes a reality." RespectAbility USA is a new national, non-profit, non-partisan organization with a mission to correct and prevent the current disparity of justice for people with disabilities.

Governor Deal said, "A job serves as the launching point for independence, financial stability and...my desire for people to have access to these benefits of employment certainly extends to those in our state with disabilities. To address the barriers to employment confronting people with disabilities, we have a work group in the Department of Behavioral Health and Developmental Disabilities looking into these issues. I am asking them to recommend how we can move forward with an Employment First Initiative in Georgia."

"It is in this way that I hope to see more individuals able to pursue their own path to a job, a career or another form of participation in community life," Deal added.

"Governor Deal has been a friend to the disability community but today, I am proud to announce that GCDD has undertaken a process that, regardless of who is governor, we'll be talking about the passage of legislation to ensure that employment is the first option for all people of the state of Georgia," Eric Jacobson, GCDD Executive Director, said.

Rep. Keisha Waites (D-Dist 60) said to the swelling crowd, "I stand with you... to increase accessibility for every individual that may be disabled throughout the state of Georgia. I want to pull out two pieces of legislation that I have been working on with many of you in the audience...that will increase accessibility to electronic textbooks for the visually impaired and... will provide increased accessibility to your capitol, as well as the legislative office buildings next door."

Rep. Dempsey, said, "We all have a story, you're right. Your personal story is what you need to share with each and every person in that building behind you."

"Know that it is time to unlock the waiting list. This is your state, my state and we deserve these services. Make no mistake about it, the people on the third floor and the second floor know that you are here," Rep. Dukes said.

2,500 community leaders and disability advocates gathered near the Capitol Steps and , in a collective voice, rallied for jobs, support for post-secondary education and release from institutions for people with disabilities. Governor Deal and Jacobson each praised the expansion of Georgia's post-secondary inclusive education program sponsored by GCDD, the Academy for Inclusive Learning and Social Growth at Kennesaw State University and noted the expansion of similar programs to four campuses in Georgia with the newest one slated to open this fall at East Georgia State College.

This year's Disability Day Rally also recognized the 15th anniversary of the landmark 1999 Olmstead Decision in which the US Supreme Court ruled it was unconstitutional for two Georgia women with developmental disabilities, Lois Curtis and Elaine Wilson, to be institutionalized against their wishes. Curtis, the sole surviving Olmstead plaintiff, was in attendance at last Thursday's Rally. In the spirit of the Olmstead Decision, the Atlanta Legal Aid Society (ALAS) and GCDD facilitated an opportunity for six individuals who have achieved freedom from institutional life to tell their stories at a dedicated StoryCorps recording booth created on-site especially for Disability Day.

Among the six storytellers was Andrew Furey, a self-advocate, artist and Eagle Scout from Lula who fought a long, frustrating battle to receive nursing supports in his home. "I didn't want to be in a nursing home; I wanted the right to stay in my own home." "I am Andrew Furey and I am Olmstead," he declared.

ALAS and GCDD presented "I Am Olmstead – Stories of Freedom" in conjunction with StoryCorps to recognize the triumph of individuals like Andrew and provide an opportunity for others in attendance to sign up to record their own stories in the future. StoryCorps partners with the Atlanta History Center and Georgia Public Broadcasting to record, preserve, and share the stories of communities in Atlanta. Selected StoryCorps recordings air weekly on National Public Radio's Morning Edition and every recording is archived in the American Folklife Center in Washington DC. The GCDD Disability Day 2014 theme, "We All Have A Story, What's Yours?" was echoed throughout the day and could be seen on the hundreds of t-shirts that covered the State Capitol grounds in a sea of blue.

Dawn Alford, GCDD's Planning and Policy Development Specialist, gave an overview of GCDD's 2014 Legislative Agenda and noted the house approved $250,000 to be used for supportive employment for 64 individuals with disabilities.

"Georgia's economic recovery and growth must include employment for citizens with disabilities. For every single dollar that a state spends on helping a person with a disability get a job, the return is anywhere from $3 to $16," Greg Schmieg, executive director of the Georgia Vocational Rehabilitation Agency (GVRA), said. "Hiring someone with a disability is not only good for business, it's good for Georgia."

Reverend Susannah Davis, pastor of Kirkwood United Church of Christ, led a prayer and a moment of silence to recognize and honor the memory of 10 Fallen Soldiers, Georgia's disability advocates recently deceased. After the rally small groups as well as groups of more than 250 from all over Georgia, adjourned to the Georgia Freight Depot for lunch, legislator visits, exhibits and other activities including banner signing, an accessible voting machine demonstration and the "I Am Olmstead – Stories of Freedom" listening station.

During this time, GCDD awarded Ralph "Robbie" Breshears from Augusta the Georgia Outstanding Self-Advocate of the Year Award - In Loving Memory of Natalie Norwood Tumlin. Disability Day at the Capitol is made possible by a host of partnering organizations and volunteers from Georgia's disability community. For a list of sponsors, visit www.GCDD.org.

GCDD, a federally funded independent state agency, works to bring about social and policy changes that promote opportunities for persons with developmental disabilities and their families to live, learn, work, play and worship in Georgia communities. A developmental disability is a chronic mental and/or physical disability that occurs before age 22 and is expected to last a lifetime. Visit www.gcdd.org for more information.

CBS Atlanta News (This link is no longer active.)

GCDD to Rally at Capitol to End Capital Punishment

On March 11, GCDD and Georgians for Alternatives to the Death Penalty plan to rally at the Georgia State Capitol to advocate to end capital punishment in the state of Georgia. Advocating for Warren Hill, the 53-year-old on death row for beating another inmate, Joseph Handspike, to death with a nail-studded board in 1990 at the state prison in Leesburg, GCDD and many other activist organizations aim to push lawmakers to reconsider the limitations on the burden of proof for a defendant's intellectual disability.

Georgians for Alternatives to the Death Penalty is a Real Communities partners of the Georgia Council on Developmental Disabilities.

Read more about the advocacy here. 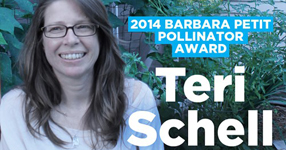 Real Communitiies Community Builder Teri Schell, founder of the Forsyth Farmer's Market, was honored at the 17th annual Georgia Organics Conference held at Jekyll Island.  Schell was the recipient of the Barbara Petit Pollinator Award for her leadership in Georgia’s sustainable farming and food movement. She is also the co-chair of the recently formed Savannah Chatham Food Policy Council.

In 2013, the five-year-old Forsyth Farmers Market was highest among all farmers markets in the state in regards to SNAP/EBT redemptions totaling $62,000. The market, under Schell’s guidance, was one of the first farmers markets in the nation to accept these federal benefits, which used to be known as food stamps. It partners with the nonprofit Wholesome Wave Georgia to double the value of SNAP purchases.

To read more about Schell's work and the Forsyth Farmer's Market, click here. (This link is no longer active.)