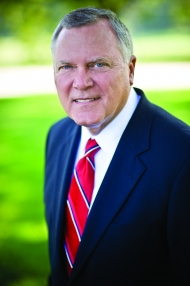 Welcome to the Georgia State Capitol and our new Liberty Plaza! It’s a privilege to take part once again in Disability Day with all of you. I would like first to thank the Georgia Council on Developmental Disabilities for sponsoring this event and bringing us all together today.

Twenty-five years ago, then-President George H.W. Bush signed into law the Americans with Disabilities Act (ADA) to ensure the civil rights of those citizens with disabilities. This legislation established a clear message throughout the nation and in Georgia that discrimination based on disability must end. President Bush remarked upon signing the bill, “Let the shameful wall of exclusion finally come tumbling down." Like those who participated in the Civil Rights movement, many people with disabilities were willing to protest and sacrifice to end the segregation of people with disabilities.

This year, Georgia will be at the center of the national celebration of the ADA. At the National Center for Civil and Human Rights, there is an exhibit celebrating disability rights. The National ADA Symposium and the international Society for Disability Studies will hold their conferences in Atlanta. And, there will be several opportunities to see the ADA Legacy Bus during these events.

In Georgia, we are committed to improving facilities managed by the Department of Behavioral Health and Developmental Disabilities and creating opportunities for those with disabilities to return to their respective communities as active citizens. In addition, we strive to make sure that no children under the age of 22 are living in nursing facilities, but rather reside with loving and stable families. We continue to make progress by opening new programs on college campuses, like those at Kennesaw State University, Georgia State University, East Georgia State College and Columbus State University.

Next year, programs will begin at Georgia Institute of Technology and the University of Georgia. I am also proud to say that we have made progress toward increasing the number of work opportunities for people with disabilities throughout our state.

As your exhibit inside the Capitol reads, we must preserve the past by remembering those who fought for your rights. We must also celebrate our present by commemorating the 25th Anniversary of the ADA, and we must continue to educate others about the accomplishments and barriers that still exist for people with disabilities.

With all of this in mind, I was happy to proclaim March as Disability Awareness Month in Georgia and recognize July 26th as the anniversary of the ADA. 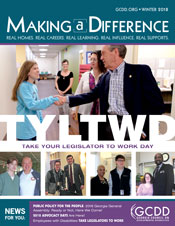 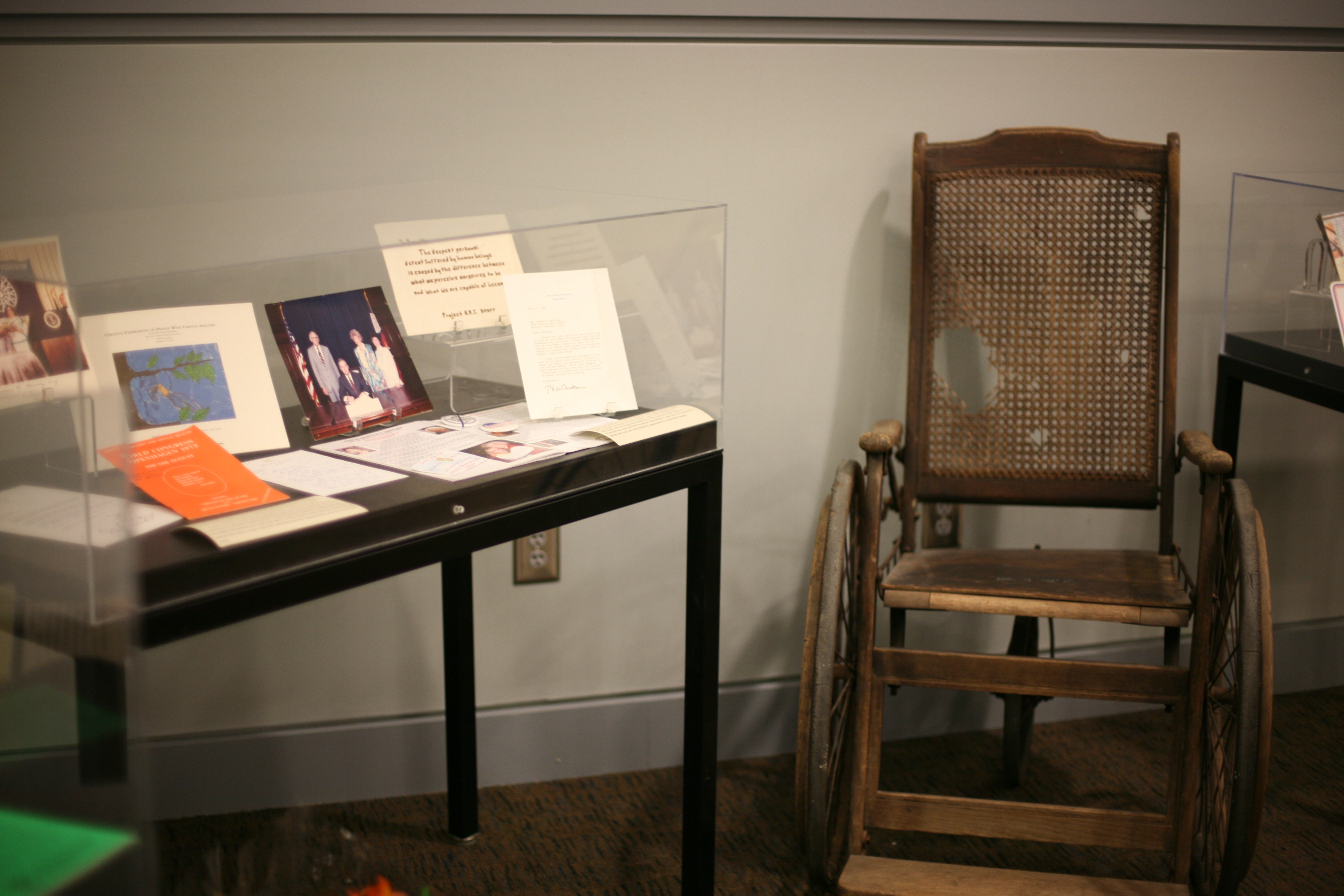 Wheelchair in the exhibit at the Russell Library is an antique 3-wheel chair produced by the Gendron Wheel Company of Toledo, Ohio in the 1930s

“Georgia’s historical part in the disability rights movement has been central to informing and creating change,” said Gillian Grable, one of the GDHA’s founders.

Highlighting major events in Georgia’s disability history, Mark Johnson, director of advocacy at the Shepherd Center, touched on early ADAPT protests, the importance of the 1999 United States Supreme Court case Olmstead v. L.C. and 2017’s “No Cuts, No Caps” demonstrations to save Medicaid. Johnson showcased how past advocacy has changed public policy and the differences it has made presently.

Dr. Beth Mount, author and founder of Graphic Futures, a consulting organization, stressed the importance of personcentered planning by creating opportunities and relationships that will highlight a person’s gifts, especially in Georgia.

“Make [gifts] and capacities visible and find places where those gifts are needed,” Mount said. “Build alliances that will sustain their contributions and be the ally that brings to life what other people feel so strongly about.”

Mount explained how the urgency of seeing that potential will aid in taking on a system, which for years was a form of constraint.

Discussing the pervasive effects of social exclusion and control, John O’Brien, former citizen advocacy planner of the Georgia Advocacy Office (GAO) and author, spoke of the history of people with disabilities being pushed aside and “living on the margins.”

O’Brien reiterated the importance of investing in people and organizations who offer direct supports. He also examined how the gap that’s been created by the system can be bridged in the future by putting in place social resources and relationships for those who have been excluded or segregated.

In a panel discussion, GCDD Council members Parker Glick and Evan Nodvin, as well as Basmat Ahmed, executive director of Al-Tamyoz Community Building, a Real Communities partner, observed that younger generations are beginning to challenge notions that people historically had about people with disabilities.

“We want to empower youth,” Glick said. “Success [to us] looks like a conversation with an individual, seeing our perspective and not being an afterthought.”

GCDD, along with the Albany Advocacy Resource Center, the Center for Social Justice, Human and Civil Rights at UGA, Georgia Microboards Association and Easterseals of Southern Georgia, sponsored the symposium.

Make a Difference with GCDD!

GCDD Council members fill two categories. Members appointed by the Governor are considered the "official members" and can serve two terms of four years each. Advisory members, who are selected by Council members, have no voting rights and serve one two-year term.

Members are expected to attend each quarterly Council meeting and to serve on any established committees. Full Council meetings are used to set policies based on the vote of a majority of members present. Recognizing the diversity of the Council membership, it is understood that unanimity will not be possible on all decisions of the Council, but members are urged to be advocates at all times for people with developmental disabilities and their families. GCDD engages in advocacy, capacity building and systemic change activities to contribute to a coordinated, consumer and family-centered and directed comprehensive system of community services, individualized supports and other forms of assistance. This allows individuals with developmental disabilities to exercise self-determination, independence, productivity and integration into all facets of community life.

GCDD offers a great opportunity for parents and self-advocates to represent the issues that are important for people with disabilities, their families and caregivers in local communities across the State.

Applications and more information on GCDD can be obtained by visiting www.gcdd.org.

Applications for membership should be returned to Eric Jacobson by August 1, 2014 either by e-mail at:

or by mail at:

The 21st annual Larry Bregman, M.D., Educational Conference was held on February 23 at the Jewish Federation of Greater Atlanta (Selig Center). Nearly 300 participants, which included adults with developmental disabilities, their families, caregivers and advocates, took part in the educational conference that emphasized topics such as being a part of the community, being a self-advocate and living a healthy lifestyle.

GCDD Executive Director Eric Jacobson emceed the event and spoke about the importance of life enhancement programs and the value of continuing supports in his keynote remarks and led several breakout workshop sessions along this theme.

The 2014 Georgia Winter Institute was held from January 26-29 in Atlanta and shared ways to make progress in advocacy for people with disabilities. Speakers at the four-day conference covered various topics such as education, homes, well-being, communities and leadership.

The conference also highlighted employment issues and speakers such as Marcia Singson who spoke about Project SEARCH, a trailblazing employment partnership that connects people with disabilities with meaningful and fulfilling job options.

The conference also featured keynote speakers Karin Korb and Chris Glaser. Korb is a two-time Paralympian and a 10-time member of the USA World Team. She is passionate about empowering young women with disabilities through all sports as well as her hands-on hospice work, her studies in Pranic healing and living a vegetarian lifestyle.

The Georgia Winter Institute is organized by the Center for Leadership and Disability at Georgia State University and co-sponsored with GCDD and other leading advocacy organizations.

Jhai James joined the Georgia Council on Developmental Disabilities (GCDD) staff in May as the public information program associate and social media coordinator. She works closely with Public Information Director and Editor-in-Chief of Making a Difference Valerie Meadows Suber to implement all aspects of the GCDD public information and public relations programs. James is a Georgia native and graduate of Columbus State University, where she was recently employed to coordinate all aspects of social media for the division of Continuing Education. She is pleased and greatly honored to be involved with an organization that works to bring about social change for individuals and families living with intellectual and developmental disabilities in Georgia.

"Since becoming a member of the GCDD team, I have learned so much about commitment, strength and perseverance while developing a passion that grows more deeply rooted each day for our community," James said. "I am thrilled to be in a position to contribute to the Council's ongoing growth and success."

James started her professional career working in broadcast production with WRBL-TV, a CBS network affiliate in Columbus, GA. She has held positions with Amaryllis Productions, a theatrical company based in New York, NY; Harpo Studios in Chicago; and Tribune, Inc. in Orlando, FL. James also worked as a communications specialist with Georgia Council for the Arts where she managed website development, coordinated social media strategy and wrote a variety of materials.