In The News - Georgia Council on Developmental Disabilities

The Georgia Council on Developmental Disabilities will stop in Gainesville today to hear from people living with disabilities.

Representatives including D'Arcy Robb, the council's public policy director, and Dawn Alford, policy development specialist, at 6 p.m. will be at Lanier Charter Career Academy on Tumbling Creek Road to hear from people with disabilities regarding the 2015 legislative agenda for the council.

Council leaders hope to hear concerns, ideas and opinions from the public, according to a news release. The stop is one of several on a statewide tour leading to the 2015 General Assembly, which begins in January.

Approximately 20 percent of Americans have a disability due to birth, injury or longevity, according to the news release. The council is a federally funded, independent state agency that promotes and creates opportunities for people with disabilities through public policy initiatives, public awareness and advocacy programs.

This article originally appeared in The Gainesville Times on September 4, 2014.

Eric Jacobson Interviews on Transfers of People with Disabilities

Eric Jacobson, executive director of GCDD, shares his thoughts with 90.1 WABE's Michelle Wirth on the moves and why its is still important that people with developmental disabilities become a part of the community.

Click here for more on the story and to hear Jacobsen's thoughts.

SAVE THE DATE!
June 13, 2015, 2 PM
Disability Pride ADA25 Georgia Parade
The ADA25 Georgia Parade route starts at 2:00 PM at the Hyatt Regency on Peachtree Street and proceeds half a mile to Centennial Olympic Park, ending in front of the new National Center for Civil and Human Rights (NCCHR).

ABLE Account Planning: Six Next Steps in 2015
So how can you plan ahead for you, your child or other family member when ABLE accounts become available later in 2015?

Here’s how in six steps:
1. Identify your need for savings.
2. Identify potential sources for income.
3. Consider an ABLE account as part of long-term financial goals.
4. Be aware of some disadvantages to an ABLE account.
5. Make sure Georgia is moving forward to establish an ABLE account program.
6. Start saving now!

ABLE Act Becomes Law
In December 2014, President Barack Obama signed the Achieving a Better Life Experience (ABLE) Act into law marking a significant achievement in disability rights. The ABLE Act allows people with disabilities to open savings accounts, similar to 529 college savings plans, where they are able to save up to $100,000 without risking eligibility for Social Security and other government programs. Additionally, individuals can also keep their Medicaid coverage regardless of how much money is accrued in an ABLE account.

Although people with disabilities may be able to start opening ABLE accounts as soon as 2015, each state must put regulations in place to make this offer available. GCDD will continue to provide updates on the ABLE Act and how it is being implemented in Georgia.

Augusta Girl Chosen to Attend ABLE Act Speech in Washington, DC
T.W. Josey High School homecoming queen Adejah Nesbitt was chosen to visit Washington, DC upon the passage of the Achieving a Better Life Experience (ABLE) Act. Nesbitt, who is diagnosed with autism, attended a speech given by Vice President Joe Biden to create savings accounts without losing Medicaid and Social Security benefits. The 17-year-old was chosen from a pool of applicants by the Institute for Educational Leadership.

A leader in her own right, Nesbitt is Richmond County School System’s first student with a disability to be chosen for homecoming queen and is a junior varsity cheerleader.

Disability Leaders and Advocates Mourn Warren Lee Hill
After being denied clemency, Warren Lee Hill, 54, was executed at 7 p.m. on Jan. 27 for the murder of a fellow prison inmate. Hill was sentenced to serve life in prison for the 1986 killing of his 18-year-old girlfriend, and in 1991, a jury convicted Hill of murder and sentenced him to death. Hill’s case has sparked debate as his lawyers tried to convince the courts that the defendant was a person with an intellectual disability, and therefore, should not be executed. State law and the 2002 US Supreme Court decision of Atkins v. Virginia both prohibit the execution of people with intellectual disabilities.

However, Georgia has the toughest-in-the-nation burden of proof for capital defendants seeking to avoid execution on grounds of intellectual disability.

Hill was granted temporary stays in July 2012, February 2013 and July 2013 so courts would have time to consider challenges filed by Hill’s lawyers. State and federal courts rejected his lawyers’ filings this time around, and the US Supreme Court declined his request for a stay of execution.

Eleanor Smith was one of the many disability leaders in the community leading the parade. “A lot of people didn’t know there was a disability rights movement,” said Smith, who founded Concrete Change. “It’s a rights issue and a social justice movement, and we wanted to make people aware of why the passage of the ADA (Americans with Disabilities Act) was so important, and why we continue to advocate today.”

Concrete Change is an international network whose goal is making all new homes visitable, a construction practice so that new homes – for people with and without disabilities – offer features making the home easier for mobility-impaired people to live in and visit.

Along with Smith, over 120 people from various organizations such as disABILITY Link joined in to raise awareness for disability rights. Additionally, planning for an ADA Parade in June 2015 is also underway and continues to seek volunteers. “The ADA was a significant civil rights movement, and by marching in the parade, we are raising awareness in the community about the next 25 years of disability rights,” added Smith.

Eleanor Smith, director/organizer of the Atlanta-based advocacy organization Concrete Change, along with Nadeen Green, published the first children's book on visitability called Libby and the Cape of Visitability to begin a meaningful conversation about inaccessible homes and how as a community, we can work to change that. 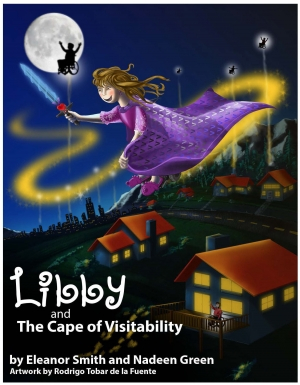 Visitability is a movement to change home construction practices so that virtually all new homes offer specific features to make the home easier for people with mobility impairments.

Written for children ages 8-13, this book raises awareness about the exclusion created when houses are not built with simple accessibility features.

"I wanted the world to be different for the kids and everyone with disabilities," said Smith. "It was a way for kids to get this message and by having a main character that has a disability, a lot of the kids who read it will be able to say, 'Hey! That's me!'."
Smith and Green write about Libby, Aria and Benjamin, all who have been best friends since they were babies.

When Aria moves to a new house, Libby, who uses a wheelchair, doesn't get invited to Aria's birthday party because the house has barriers. The kids then meet Everett, an adult wheelchair athlete, who tells them how the disability rights movement gained successes through years of public demonstrations and pressing for laws. Everett shows them a photo from the 1970s portraying people with disabilities blocking inaccessible buses.

The kids are inspired to create their own version of public action to achieve the goal of a step-free entrance and wide bathroom doors in every new house.

The book brings awareness to visitability for children, but also allows parents to interact with the movement by showing what they can do to become involved in the cause.

"It's important that Georgians educate themselves about visitability, and know that making homes accessible doesn't cost extra or make it look funny," Smith said. Click to Tweet this!

Accessible homes benefit people with disabilities, the elderly, and people who are recovering from surgeries or injuries.

A victory for Smith and Concrete Change, which started in 1987 in Atlanta, was the recent mandate passed in Austin, TX that every new home built has to be accessible. The same movement has expanded to Tuscon, AZ and Bolling Brook, IL.

To get a copy of Libby and the Cape of Visitability, contact Eleanor Smith at .

For more information on Concrete Change and how you can be involved in the visitability movement, visit www.concretechange.org.

Call Your Senators and Encourage a Vote for CRPD

Crucial civil rights legislation for people with disabilities currently awaits the US Senate's vote. The Convention on the Rights of Persons with Disabilities (CRPD) is an international human rights instrument of the United Nations that is intended to protect the rights of individuals with disabilities.

Modeled after the Americans with Disabilities Act, CRPD values independence, respect and the concept of reasonable accommodation for people with disabilities. The treaty is vital for creating legislation and policies around the world that embrace the rights and dignity of all people with disabilities. Even though President Barack Obama signed the convention and forwarded it on to the Senate, it has failed to reach the necessary two-thirds margin required to approve the CRPD. GCDD encourages Georgia citizens to contact Sen. Johnny Isakson and Sen. Saxby Chambliss urging them to support the convention. 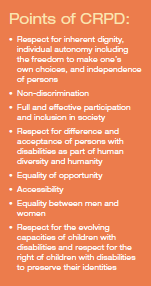 Through advocacy, we can make a difference for Georgians with disabilities and for all those around the world.

The Georgia Leadership and Education in Neurodevelopmental Disabilities graduated 16 participants from its program this past spring.

The program is designed to teach trainees skills to collaborate in the interest of coordinated, comprehensive, culturally competent care on behalf of children and adults with disabilities and their families. "GaLEND participants are future physicians, nurses, psychologists, teachers, social workers and speech-language pathologists along with family members and self-advocates," said Mark Crenshaw, director of interdisciplinary training at Georgia State University.

The GaLEND is a year-long interdisciplinary training program that is designed to strengthen Georgia's capacity to respond to the unique gifts and needs of children and adults with disabilities and their families. GaLEND operates as a program of the Center for Leadership in Disability at Georgia State University, in collaboration with the Satcher Health Leadership Institute at Morehouse School of Medicine and the National Center on Birth Defects and Developmental Disabilities of the Centers for Disease Control and Prevention.