People with disabilities in the Gainesville area expressed a desire for better quality services and support at a meeting Thursday with the Georgia Council on Developmental Disabilities. The meeting was one of several statewide stops on the council's "listening tour" leading up to the 2015 General Assembly. Council leaders asked questions and provided information for a small group gathered at the Lanier Charter Career Academy.

"We are an independent state agency and our mission is, in the informal way I always say it, we're trying to kick the can or move the ball further for folks with disabilities and their families," said D'Arcy Robb, GCDD public policy director. Robb said she typically poses questions to the public at the listening tour meetings to stimulate discussion.

Her first question asked, "What's working in this community for people with disabilities and their families?"

The second question Robb posed asked what the audience believes is not working.

Jennifer Allison, clinical instructor at Brenau University, said most people don't know what services are available locally. Others expressed concerns over the quality of services, educational opportunities, transportation to and from services and job opportunities.

"One thing we hear a lot is essentially changing the culture," Robb said. "Not looking at people with a disability as first and foremost that disability.... So just being more supportive and embracing as a society, seeing people as a whole package for who they are and not just stigmatizing them for this disability or that diagnosis."

Robb said the most important part of the meeting is listening to the public. She said not only does it help give the council an idea of what Georgians with disabilities are looking for, but it lets people know they are being heard. "People have said that they appreciate, No. 1, being listened to, and us coming out in person," Robb said. "I think people appreciate that opportunity to have a community forum and have a voice."

Dawn Alford, advocate and GCDD policy development specialist, encouraged local residents to join the council's advocacy network at www.gcdd.org. "Our team focuses on advocacy, trying to push the system's change," Alford said. "In order to do that, we need the help of grass-roots advocates, people in their communities reaching out to their own legislators."


The original article appeared in The Gainesville Times on September 5, 2014.

The Georgia Council on Developmental Disabilities will stop in Gainesville today to hear from people living with disabilities.

Representatives including D'Arcy Robb, the council's public policy director, and Dawn Alford, policy development specialist, at 6 p.m. will be at Lanier Charter Career Academy on Tumbling Creek Road to hear from people with disabilities regarding the 2015 legislative agenda for the council.

Council leaders hope to hear concerns, ideas and opinions from the public, according to a news release. The stop is one of several on a statewide tour leading to the 2015 General Assembly, which begins in January.

Approximately 20 percent of Americans have a disability due to birth, injury or longevity, according to the news release. The council is a federally funded, independent state agency that promotes and creates opportunities for people with disabilities through public policy initiatives, public awareness and advocacy programs.

This article originally appeared in The Gainesville Times on September 4, 2014.

GCDD On the Road to the 2015 General Assembly

LISTENING TOUR STOPS IN GAINESVILLE TO HEAR FROM PEOPLE LIVING WITH DISABILITIES
Community Conversations Give Insight into Hearts and Minds of Advocates, Families and Neighbors

What: Georgia Council on Developmental Disabilities (GCDD) Public Policy Listening Tours: Whether it's jobs, schools, healthcare, services, housing, transportation, access, all issues are on the table. Members of the disability community, their families and friends are encouraged to help shape the 2015 legislative agenda for GCDD at a meeting to share their concerns, ideas and opinions by dialoguing with the agency's public policy staff and the broader community.

Why: The road to the State Capitol begins with advocacy! 50 to 100 are expected at the Gainesville meeting. One in five or 20% of all Americans have some type of disability as an occurrence of birth, injury or as a matter of longevity. Most people are likely to have a loved one, neighbor or co-worker with a disability in their lifetime, or chances are they will acquire a disability themselves.

A developmental disability is a chronic mental and/or physical disability that occurs before age 22 and is expected to last a lifetime. It may require supports in three or more of the following life activities: self-care, language, learning, mobility, self-direction, independent living and economic self-sufficiency.

The tables are overflowing with sweet and spicy wings and stuffed grape leaves. The room is overflowing with bright, boisterous people. And the trees outside are dripping with Spanish moss.

Welcome to Thomasville, first stop on GCDD's 2014 Listening Tour! These tours are a GCDD tradition started by Pat Nobbie, and this summer Dawn Alford, Dave Zilles and I decided to revive them. Only instead of holding the tour at ARCs as the previous tours were, we added a twist by holding this year's tour in various public spaces in the communities we're visiting. We didn't know what kind of turnout to expect, but I was hoping it'd be like Field of Dreams – if you hold it, they will come. 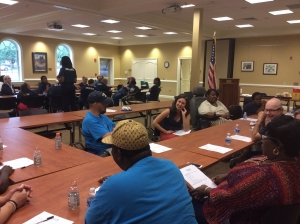 Come they did – 40 people strong! We had such a healthy turnout that the good folks at Thomas County Public Library had to open up a larger room for us (thanks again, TCPL staff, for being so gracious and accommodating). Once we had enough tables and chairs for everyone, we ate, and ate well, potluck style. Dawn and I introduced ourselves, passed out voter registration forms, and talked a bit about who we are at GCDD and what we've been up to lately. Then the real fun began – we split the room into two groups, and it was time for us to shush up and listen.

Our "agenda" had just three questions: What's working in this community? What's not working? And, what are the most important changes we need to make for folks with disabilities?

What is working: community groups and get-togethers, like bingo and bowling. Jobs, like one young man's job at the fire station, and one young woman's job at the local school. Support groups. Living with your friends, living with a sense of independence.
What's not working: forms, forms, too many forms that are too repetitive and too complex. Better partnerships are needed with the tech schools. Flexible transportation is a big need in this rural area. And funding is needed – especially flexible funding, especially when it comes to employment.

That led right into our next question, and one I went around the table to ask each person – what's the most important change we need to make for people with disabilities? There were so many insightful answers I could write for pages, answers like more grassroots outreach, breaking out of poverty, living in safe places, and changing attitudes in the community. But most of the answers focused on jobs – jobs and real, meaningful things to do during the day. As one mother said, people know when you're just giving them something to fill their day, no matter what their IQ is. 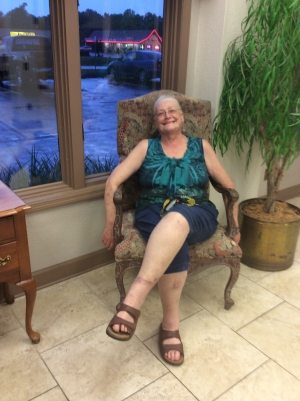 I admit it.  I was talking a lot about jobs too. One of the big issues GCDD is working to advocate for is Employment First. Employment First means that work in the community is the primary option in the publically funded service system – work that is paid at or above minimum wage. The reality is that virtually everyone can work with the right supports. That's not just a feel-good slogan, it's really true! Check out the stories at Employment First Georgia for inspiration: http://www.employmentfirstgeorgia.org/

Meanwhile, Dawn and I headed back to Atlanta for Council meeting, full of ideas and looking forward to hitting the road for our next tours. A huge thank you to our wonderful local host, Bonnie Seery, and to Dawn's mother, the lovely Mrs. Jean Alford, for helping make it all happen!

Next stops on the Listening Tour are Monday, July 21st in Savannah and Tuesday, July 22nd in Columbus – please come if you're in the neighborhood, we'd love to see you there!